Drama programs are back for the fall of 2021!

These are 6week programs running Wednesdays from Sept 22 to Oct 27. Cost is $50, no additional registration fee. These are both non-performance programs. Registration is open online now, please use the link below to access the system.

These classes are non-performance-based. Students devle in to acting techniques and will explore drama games, creative thinking and improv … discovering more about themselves and their characters along the way. Visit the registration page to save your spot now!

Wait, do I want drama or musical theatre?? Drama is acting. Musical Theatre is acting with sing and dancing components added. Still not sure? Take both!

Workshops are offered at various times throughout the year to provide students the perfect opportunity to satisfy their curiosity about drama while exploring their imaginations and encouraging creativity through games improv, just without the audience.

The Youth Theatre Department presents full theatre productions, usually from the Fairy Tale genre appealing to a wide family audience. These productions are cast through an audition process and presented to the pubic after a 3-6 month rehearsal period. Actors of all ages have been involved in these productions in the past, from 5years to adults, all depending on what each script calls for. There is a fee for participating in this program, which varies again depending on the production chosen.

The theatre program has been on an extended intermission, but we do hope to have it running again soon. Drama classes are making a comeback, so hopefully productions will follow. Stay tuned for any updates here!

From June 18-20 and 25-27, 2009, the UFV Main Theatre was transformed into the magical Kingdom of Nevernod as the Creative Outlet’s youth theatre team brought the tale of Sleeping Beauty to life. And through the incredible talent of Sherry Fraser from Imagine That Artworks, the cast themselves were transformed into magical entities…

You can learn a lot from a fairy tale. There’s always a moral to the story. For example, a brick house is much sturdier than one built of straw, or, if your Grandmother has overly hairy arms and very big teeth, she’s likely not your Grandmother. The tale of Robin Hood teaches us to give people a chance, shows us the benefit of working together, the importance of honour, trust and fairness. This production of Robin Hood has taught us similar lessons. UFV Theatre students joined our cast and brought experience and knowledge to the stage. Our younger actors, many of whom are new to the stage, brought their energy and desire to learn. After many weeks of rehearsals the joint effort by cast & crew has produced this show. None of this was done for money or in hopes of great riches (our rag-tag crew are all volunteers, myself, Debra, Jamea, Becca, the ushers and set crew…) but rather, like Robin Hood and his followers, we do it to see the happiness it brings others. The applause and laughter from the audience is worth more than all the gold in England. Enjoy the show. 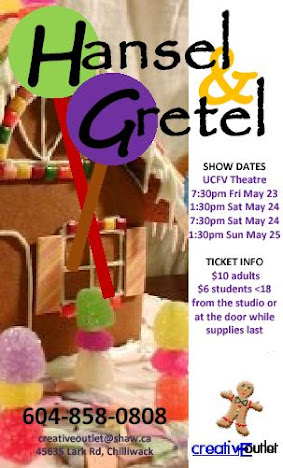 Directing children’s theatre is like being in a fairy tale. The hero (aka the Director) is out strolling along a path on a warm afternoon when he comes across a woman… the Producer (who, luckily for him, is more of a fairy godmother than a nasty witch). She tempts him with candy and says,

“Come on it will be lots of fun, it’s a play… what could go wrong!”

He innocently accepts the task.

Suddenly, with a wave of her wand, the Producer makes a cast of 19 pre-teens and teenagers appear! (who, contrary to public opinion, are much more like happy, helpful dwarves than nasty flying monkeys from Oz).

Unbeknownst to him, there are still many challenges on the road ahead… getting everyone to rehearsals, getting them to memorize lines and blocking, coordinating with set, costumes, lighting and makeup people. However, he moves ahead, always steadfast and optimistic astride his giant white steed with shiny suit of armour (well ok, maybe not that last part.)

Word spreads and good villagers come out to share their talents! The cast learns their lines! “Gods” of Lighting and Makeup make incredible things appear! The curtain rises, and audiences applaud. A happy ending.

In all seriousness, it has been a pleasure directing these young people and watching them take suggestions and comments to heart and put it into their characters and performance. They have become friends, a team… a cast.
I must again acknowledge Tanya, Jamea and Sherry, who alongside Debra and myself, have all volunteered to give these kids the opportunity they deserve to show off to the benefit of their community what they are capable of when given just the right outlet for their energy…

In May 2008 The Creative Outlet raised the curtain on the second adventure of its fairy tale theatre series.. Hansel & Gretel. The play was directed by Larry Hamm, stage managed by Tanya Schwaerzle and featured lighting design by Jamea Lister and amazing face and body art of Sherry Fraser. Our production was written by Vera Morris and presented through special arrangement with Pioneer Drama Service.

Ahoy mateys! Lend yer ear to the tale of our first major theatre production… truth be told, it was an adventure not for the faint of heart… 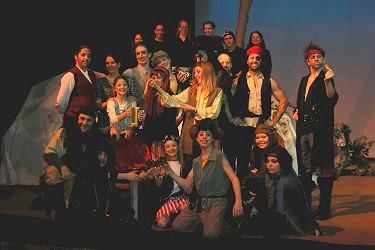 Treasure Island was our first major production. Our cast of 14 varying in age from 7 to slightly over 30 years old. We rehearsed twice a week beginning in September, and by opening night, Friday November 24, 2007 cast and crew were ready to take the audience on a grand adventure in search of pirate’s gold. The show ran one weekend. Unfortunately the freak snow storm that blanketed our good city in almost two feet of snow also happened to coincide with our run. Nevertheless, those who braved the weather were treated to a show they’ll not soon forget! 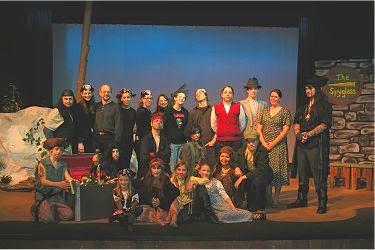 And so… in the immortal words of Captain Hamm… Keep your sails full of wind, the sun in your face, gold coins in yer pocket, a good sword in your sheath and friends by yer side (perferably ones who keep rum in their bottles!).

Since 2004 The Creative Outlet has offered an ever-expanding array of Arts programs for kids, youth and adults in dance, drama, musical theatre, choir, art, music, magic and more to provide Chilliwack's youth a creative outlet for their energy and imaginations, resulting in increased self-confidence, self-awareness, interaction with others, public speaking,
reading skills, quick-thinking and problem-solving.